”Five-star for English press causes heartburn among Shivir journalists While most English language journalists are checked-in at Hotel Clarkes Amer, others are accommodated in a guest house.

the Congress party ferried around 300 journalists in three buses to Jaipur. They were told that they would be put up at the five-star Hotel Clarkes Amer. But some of them, when they reached the hotel at night, realised that they were to stay at other accommodations. This caused a lot of heartburn and subsequent pandemonium. A lady journalist was heard berating a hotel staff: “On what basis have you decided who is to stay where? The whole point was that everyone would stay together.”

The other accommodations included 1589, a guesthouse owned by Clarkes, and the nearby Hotel Lalit. However, since food and transportation arrangements were made at Clarkes, journalists were upset about the inconvenience involved.

Congress general secretary B.K. Hariprasad was harangued by grumpy journalists on the night of 17 January, while he shared the buffet dinner with them. Rajsthan Chief Minister Ashok Gehlot came and left after spending half-an-hour. A senior journalist with a prominent paunch was heard complaining: “How am I to share a bed with my room-mate? There is hardly any space for me.” Hariprasad could only listen and smile apologetically.

Later, some journalists were heard claiming that the correspondents from the regional press were put up at 1589 and other hotels, while Clarkes was reserved for the English press. However, this was not entirely true, as your humble correspondent was also put up at 1589; the number is apparently lucky for one the owners of the property.

Journalists were also provided food but the menu was strictly vegetarian, to the chagrin of some journalists. However, Hotel Lalit served non-vegetarian fare, according to a journalist with a Chandigarh based newspaper. This made him opt to stay there despite the protestations of his roommate from an Andhra Pradesh based publication, who wanted to shift to Clarkes, like other journalists, many of whom did that subsequently. The journalist with the Chandigarh based daily quipped, “Congress is becoming like the BJP and vice-versa. Earlier, the BJP served only vegetarian fare and no booze, but they do it now. Now the Congress is following their previous policy.”

The media centre (from where this copy was filed), functioned perfectly. Journalists could be seen with their laptops, enjoying the free Wi-Fi, while others used the nearly 40 computers provided by the party. Other facilities included fax machines, scanners and printers. At least in this department, the party scored a clean goal.” 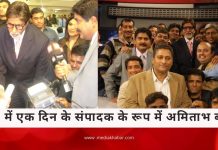 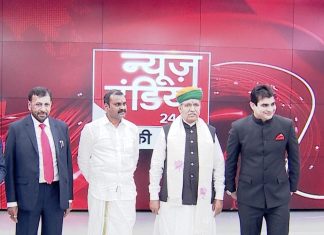